Community United Church has always been ecumenical—of many faith traditions and philosophies! Fifty years ago, on September 1, 1968, St. Luke’s United Church of Christ and the Erie Church of the Brethren began worshiping together as two congregations under one shared roof. The story of how that happened is a unique one. 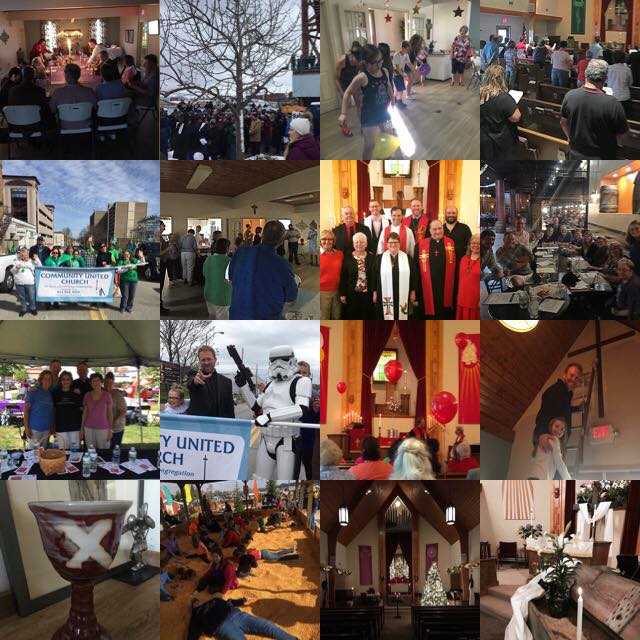 St. Luke’s United Church of Christ had to leave downtown Erie due to an urban renewal project. The people of St. Luke’s had purchased five acres of land on the south side of the city in order to build a new facility. However, they were without a pastor and were worshiping in a chapel at the local Lutheran Home for the aging, with an interim minister to support them. Many of their members began waning in attendance without a certain future.

It was around that time that the St. Luke’s UCC board president, Mr. Luther Wahl reached out to the Church of the Brethren to discuss shared use of their church facility. In short time they were worshiping together. Thirty-five UCC people arrived at 1011 West 38th Street, and with the remaining Brethren, a new community formed. According to church documents, throughout the next year “as little attention to denominational lines was given as was possible.” Rev. Richard Mikolen, a Baptist minister, served as the interim minister. Membership peaked between 194-200 people with this new ministry partnership.

The church board of St. Luke’s UCC offered to purchase the remaining mortgage of the building at 1011 West 38th Street, which gave the UCC fifty percent ownership of the building with the Brethren. On January 1, 1969, the Rev. Levi J. Ziegler began his service as pastor of the church. What was supposed to be a three year trial run of ecumenical ministry became a formal joint ministry on December 1, 1969 when the new charter did away with the names of St. Luke’s UCC and the Erie Church of the Brethren. On that day, we formally became Community United Church.

In 2014 the Rev. Dr. Rich McCarty became senior pastor of the congregation, after having served six years as a volunteer pastoral assistant. In 2017, the church called Joy Johnson as a licensed minister to serve as the Associate Pastor. As Community United Church begins its Jubilee year of celebration, Pastor Rich and Pastor Joy serve as the pastoral team. They do so in coordination with church staff, including Tracy Davis, the first to hold a new church administrator position, and Cheryl Strecker the director of music. Leadership of the church continues to rest with the church council. Church ministries are shared with a newly organized board of elders, Sunday deacons, a revitalized discipleship team, over 140 communicant members, and dozens of friends and supporters of the church.

In the last four years, Community United Church has moved to two Sunday services, added a mid-week contemplative service (inaugurated by the Rev. Dr. Matthew Rendulic), created new small groups, new education opportunities, participated in increased community outreach, renovated its facilities, and added 30 active members to the church. Grateful for continued growth, and believing we are held strong in times of trial, we boast that it is only upon Christ Jesus as the rock of God’s grace that we are Community United Church—made firm by our past, and open to the grand possibilities of our future.

LOOKING FORWARD TO THE FUTURE