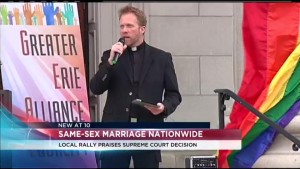 On Friday, June 26, 2015, the Supreme Court of the United States made marriage equality the law of the land. At the Decision Day Rally on the steps of the Erie County Courthouse, Pastor Rich made these comments:

I celebrate tonight with you, not only as a fellow American citizen; not only as a gay man; but more specifically as an ordained minister of the United Church of Christ, and one of the pastors at Community United Church, here in Erie, Pennsylvania.

For the last two days I have been in Cleveland, Ohio participating in my denomination’s Open and Affirming Coalition, celebrating thirty years of officially welcoming LGBT people; and celebrating that our faith tradition now has 1,300 LGBT inclusive congregations (and a goal to add 3,500 more).

In these open and affirming congregations we have been celebrating marriages between same-sex couples, whether it has been legal or not. Now thanks to the Supreme Court’s ruling, we can not only offer the rite of marriage, but we clergy persons can now sign the legal marriage certificate in all fifty states for all adult couples in mutual and loving relationships who choose legal civil marriage in addition to their personal commitments. And many of us who are clergy will continue to do just that.

As we celebrate today, we honor the five justices of the Supreme Court for recognizing that we are a Constitutional Republic, and not a theocracy–and that equal protection under the law is not something for the privileged few, but a Constitutional right for all people.

Before any of us here were born, there were people who bore witness to the need for equality with their very lives:

For all of these people, we remember that we are indebted to them as much as anyone who dares to take credit for this day.

From this great cloud of witnesses, I do hear them calling us to celebrate today’s ruling and to continue to bear witness–and to strive–for equality and human flourishing.

So yes… we must celebrate today: for them, and for us, and for the next generations. But we must allow the celebration of this day to fuel our work for inequalities not yet vanquished.

Tomorrow we must turn and fight for things like Pennsylvania House Bill 300 that seeks to provide employment, housing, and public accommodation rights for LGBT people.

Tomorrow we must learn not to silo ourselves for the sake of LGBT rights alone, but to boldly stand in the prophetic stream of justice with brothers and sisters who suffer inequalities because of race, sex, economics, age, or anything else.

Today we celebrate our new rights, but tomorrow we must learn to embody that ancient wisdom that tells us: when one part of the human race suffers, we all do–because we are one body!

And so in closing, let us not only celebrate today’s ruling, and let it not only inspire us to fight for all human rights, let each of us also hear this benediction from one my favorite and greatest heroines:

You have to take care of each other.

You have to be strong.

The hardest thing in this world is to live in it.

My friends, let’s go to work!